Whether snorkeling in the warm, transparent waters of the Caribbean near Corn Island, the deep, blue Pacific off San Juan del Sur, or the freshwater crater lake of the Apoyo Volcano, Nicaragua offers a variety of remarkable snorkeling and diving venues.

Pacific diving, which is for seasoned divers, showcases larger species, including formidable parrot fish, snappers and surgeonfish, moray eels, and depending on the season, dolphins.

Nicaragua’s unspoiled rainforests are home to 7% of the planet’s biodiversity.

A great way to observe this abundant flora and fauna is with a canopy tour. Visitors traverse between varying platforms ranging from 10 to 100 feet in the air, using high-climbing techniques and equipment.

It offers an escape from the “real world” atop treetop perches surrounded by vistas of Nicaragua’s majestic volcanoes and a melodious symphony presented by native jungle birds. Mombotour offers such a tour from the Mombacho Volcano (located 9 miles south of Granada), which culminates with a 70-foot rappel from a 250 year-old Ceibon tree.

Canopy adventures can be experienced around the country in a variety of environments and settings, whether taking an exhilarating ride through rainforests, coasting over lakes, rivers, lagoons or flying high above coffee plantations.

With all tours, whether wildlife watching or adrenaline-pumping adventure, safety is always a priority. Guides are well trained and equipment is maintained to stringent standards. www.canopytour.com 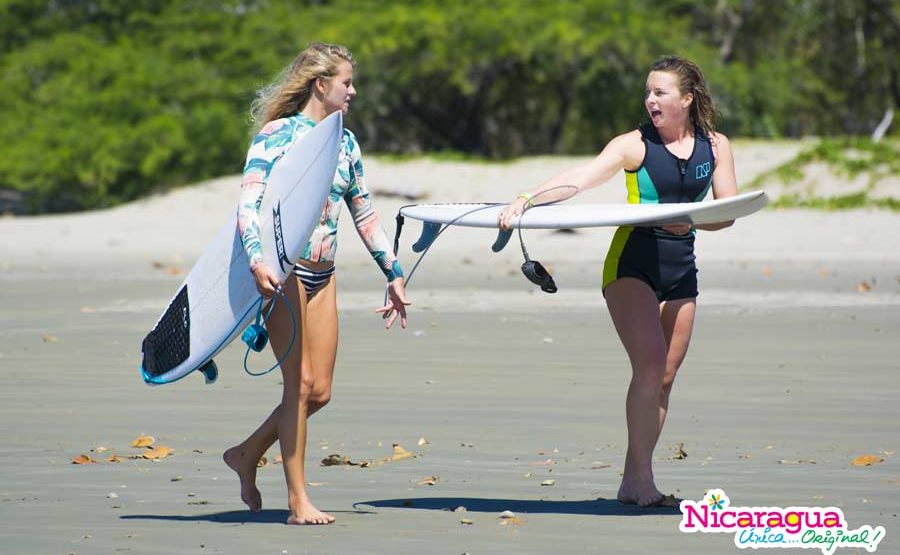 The beaches of Nicaragua, especially those on the country’s Pacific coast, are known for impressive surf and unexploited beauty.

The most popular destination for surfers from around the world is a 37-mile stretch of beaches called San Juan del Sur. This region, located on the southwest coast of the country, was a stop on Quicksilver’s The Crossing in 2003, a worldwide quest in search of “the perfect wave.”

Maderas, a secluded beach beloved by locals and visitors alike, is one of the surfing community’s best-kept secrets.

For information on local hot spots and some general information about surfing and traveling in Nicaragua, visit www.nicasurf.com and www.surfnicaragua.com

Sandboarding down the Cerro Negro

Climbing the Cerro Negro is not like climbing any other volcano in Nicaragua.

The volcano is only 400 meters high, but the ascent is steep and tough. There is no paved trail, merely a natural path along a rim that leads to the top. The ascent takes about one hour to the top, and although it requires some effort, the superb views are rewarding.

The absence of trees provides fantastic scenery, and upon reaching the top, visitors have a 360-degree view of the area.

One of the volcano’s slopes is too steep to climb, but consequently, it is great for a fast descent! Instead of large rocks, this side has volcanic sand, providing a great surface for running downhill. This thrilling experience takes less than ten minutes before reaching the bottom, but for the less athletic hikers it is also possible to walk more slowly, while enjoying the superb views. Alternatively, experienced snow- or sandboarders can use a wooden board to go downhill, much like snowboarding down a mountain, but without snow! 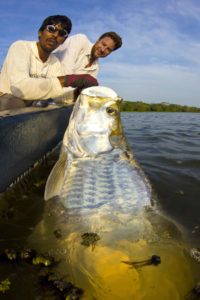 Sport fishing is truly one of Nicaragua’s greatest draws. With two oceans, gigantic lakes, multiple rivers and inviting lagoons, Nicaragua has something different to offer every fishing enthusiast.

The International Sports Fishing Tournament takes place each September on the San Juan River and on Ometepe Island, recognized as the world’s 10th largest island to be located in a freshwater lake. In addition, the first International Fishing Tournament took place May 2005 in the lush Solentíname archipelago near the Rió San Juan Region. Still undiscovered, over-fishing has not plagued Nicaragua as it has other nations, and so most bodies of water in and around the country still teem with sea life. Anglers can battle Blue, Black, or Striped Marlin on a Pacific excursion or look on in amazement while reeling in a 100-pound giant tarpon on the San Juan River. Lake Nicaragua (the second largest lake in Latin America) is considered one of the most interesting freshwater fishing spots in the world with bull sharks, “róbalos”, 30-pound snook and mammoth tarpon. Popular fishing outfitters include for Rio San Juan, Surfari Charters (www.surfaricharters.com).

Exploring the natural beauty of Nicaragua is something that should not be done in haste, so hiking provides a perfect pace to soak in every last sight, sound, and smell.

The Mombacho Volcano Natural Reserve has multiple trails with specialized guides to help point out native vegetation, including hundreds of species of orchids. For the more adventurous, Nicaragua also has many active volcanoes which can be hiked, climbed and even skied. Situated in the northern, more temperate region of the country is Selva Negra, one of several coffee plantations in the area, where one can explore untouched rainforests while learning about the coffee-growing process.

For a more rigorous yet breathtaking outing, climb the two large volcanoes of Ometepe Island: Concepcion and Maderas.

Maderas features petroglyphs, waterfalls, and a beautiful lagoon in the volcano’s crater. Momotombo, one of the most challenging climbs in the country, provides spectacular panoramic views of its surroundings. Visit www.selvanegra.com, www.mombacho.org for more information on hiking and other adventure excursions in Nicaragua.

A recent trend in extreme adventure is mountain biking and skiing down the side of the Cerro Negro Volcano, an active volcano just east of León. (Cerro Negro is also one of the youngest volcanoes on the planet.) While these extreme sports may carry some risks, for the daring, the adrenaline rush is just another part of the adventure. From exploring and hiking scenic surroundings, taking the plunge into un-chartered waters, to riding the ultimate wave or just pushing adventure to the extreme, Nicaragua offers a host of excellent options for the casual observer and the active participant. www.toursnicaragua.com can facilitate a tour offering a variety of adventure opportunities.

6 ideal destinations in Nicaragua to visit with your family

Nicaragua has a destination and activity for all ages and sizes, from claiming volcanoes, surfing, enjoying the cold mountain regions, or simply…

[vc_row][/vc_row][vc_column][/vc_column][vc_column_text] Worldwide, during the month of December, most of the time when we talk about Christmas we always think of snow, but…

[vc_row][vc_column][vc_column_text] Spending time with your partner or friends is simply necessary to renew yourself and get away from your stressful daily routine.…

[vc_row][vc_column][vc_column_text] Adventure tourism is one of the essential characteristics of the Miravalle Canopy Tour, located 10 minutes from the city of Granada…

A year without work, that’s why we chose to leave Italy and fly to Nicaragua

[vc_row][vc_column][vc_column_text] In San Juan del Sur, Nicaragua, an exceptional window to the Pacific a few kilometers from Costa Rica, since the end…