The Apoyeque lagoon is one of the best-preserved lagoons in the Pacific region of Nicaragua, according to European experts who have carried out research in this body of water.

This lagoon of volcanic origin is very close to the Chiltepe peninsula and part of this natural reserve is also the Xiloá lagoon, which belongs geographically and administratively to the municipality of Mateare. 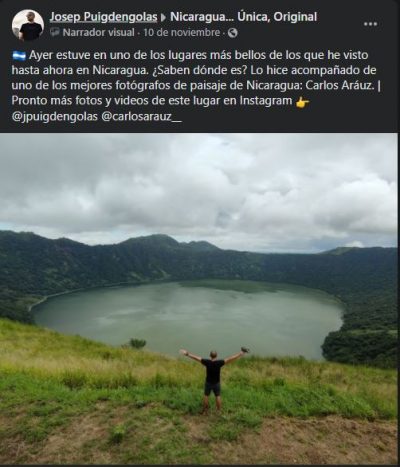 British volcanologists say that Apoyeque may be the second most dangerous volcano in the world, after Krakatoa in Indonesia, because there are many fumaroles in its environment and there are several urban centers around it.

From the top of this volcanic lagoon, you can see the Momotombo and Momotombito volcanoes, as well as Lake Xolotlán and the towns of Managua, Ciudad Sandino, Mateare, San Francisco Libre and the mountains of Ciudad Darío and San Nicolás.

Because it is a little-visited attraction, Apoyeque is almost virgin.

According to experts in the field, it may be the second largest body of water in the isthmus after Lake Cocibolca. And it is located in the center of the volcanoes of Nicaragua.

It has great potential for the development of tourism in this area of the department of Managua, Apoyeque is conducive to adventure tourism.

Here you can go hiking to appreciate its spectacular 360-degree view. In its waters, you can swim and relax.

Apoyeque, in addition, has an unexplored archaeological value, which has not yet been dimensioned, due to having had an indigenous settlement in its vicinity, which is proven by some broken vessels and spearhead and arrow that have been found very close to the lagoon.

Apoyeque is only 16 kilometers from the capital of Nicaragua, Managua, you can reach its crater first by vehicle and then on trails that the locals know.