The petroglyphs appear as a witness before writing that transcends time and can help understand the intellectual development and knowledge acquired by cultures over time. His worldview is emphasized in the communication between man and the world, rather than between man and man, an analogical thinking is causative had before. In this sense it is logical to think that objects loaded with representational art may have been valued in a difficult way to know for us. Throughout the Nicaraguan territory can be found examples of petroglyphs demonstrations like those found below.

Footprints Acahualinca are recorded human and animal footprints in mud and left thousands of years ago on the edges of Lake Managua. The historic site has 2 excavations. accidentally first found by a group of workers who were digging for quarrying stones in 1874 and through studies, as proof of Carbon 14, was tested its age of approximately 6000 years, which makes the tracks oldest in the Americas.

These footprints were left by a group of around 10 people including men, women, children and animals. One of the first hypotheses arise is that the group was fleeing because of the eruption of a nearby volcano, only to be ruled by a government study, which means that these people were not retreating, instead, it is likely that They are heading towards the lake looking for food and water.

The prints were left in a layer of volcanic mud resulting from a volcanic eruption nearby (researchers are not sure what volcano). The reason why these traces are still preserved thanks to a layer of mixture of volcanic materials which covered the footsteps keeping them in perfect condition.

The second excavation was conducted in 1977 by the Nicaraguan researcher Jorge Espinoza, in an area near the first finding and 4m deep. The excavation also allows us to appreciate the geological strata of exploration. In addition to observing the tracks, you can also see an exhibition of pre Columbian pottery found at the site and elsewhere in Nicaragua. The collection ranges from ceramics to use utility remains and funeral ceremonial vessels; tools Pre – Columbian, a skull of Leon Viejo and mammoth footprints.

Within the historical site also it operates a small library dedicated to children’s sector. Named after Bro. Hildeberto Mary and inaugurated in May 2010, this small space reading and student support services offers educational talks on different subjects and reading groups. The library is open from 8:00 AM to 4:00 p.m.

La Poza del Danto is characterized by the diversification of forms of rock, zoomorphic art (monkeys, birds), anthropomorphic (human faces and figures) Geometric (American cross) and abstract. The cruciform symbol “American cross” that according to researchers as Fray Alonso Ramos described in Yucatan Mexico Indians worshiped with great reverence and made processions to ask for rain. Hildeberto Maria (Researcher) mentions that is related to the location of the cardinal points namely east, west, north and south. This representation is manifested in the new world from Canada to Patagonia and Nicaragua in Rivas,Granada, Masaya, Chinandega, Leon, Solentiname archipelago in pre-Columbian pottery. Today in some towns of Nicaragua (Cerro Chirinahuaty in Monimbó) the cross has meaning, the passage of summer rain and to ward off evil spirits.

zoomorphic motifs which include representations of monkeys, according to the researcher figure Hildelberto Mary, is part of the archaic legends of several Mesoamerican peoples. Is the hallmark of the eleventh month in the Aztec calendar; according to the Mayan cosmogony says the man passed by the state of monkey before they reach the perfect man. In Mexico ape he was associated with the arts and was the patron of the games, sports and dance.

At the top of the site, about 40 meters north, an area of sugar cane cultivation of about 2 square kilometers in which you can observe abundant archaeological materials (ceramic and stone) surface is located.

Named by the locals in the winter time or when the river seen flooding has great silting result of forest clearing on the banks of the river, which is concentrated or stagnant specifically in place where the engravings are located.

The site consists of basaltic walls of approximately 7m x 3m which are arranged on both sides of the river of the same name, facing east and west respectively. In every support cave representations are zoomorphic (monkeys and fish) anthropomorphous (face with forms of heart) and abstract. 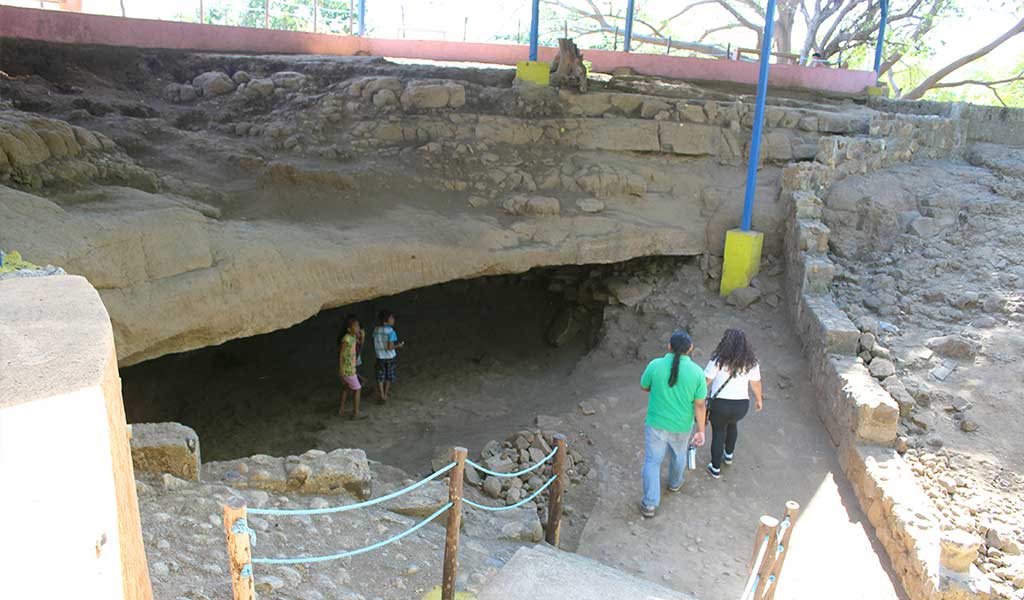 The site is located in Pochomil road-Villa El Carmen, it is a small cave where evidence ancestors left engraved with zoomorphic motifs, their existence in the area. It has infrastructure, stands with access to the cave with its railings. It is located within the so-called Zone 1, which is the area between the Pacific Ocean and Carazo Plateau.

In this area the distribution pattern of pre-Columbian settlements, has as main rivers and is characterized by the  existence of places with engraved on the banks of the river basins of Montelimar, Amayo, Cocoa and Cañas rivers stones, the total area is estimated Zone 1 in 55 Km2. 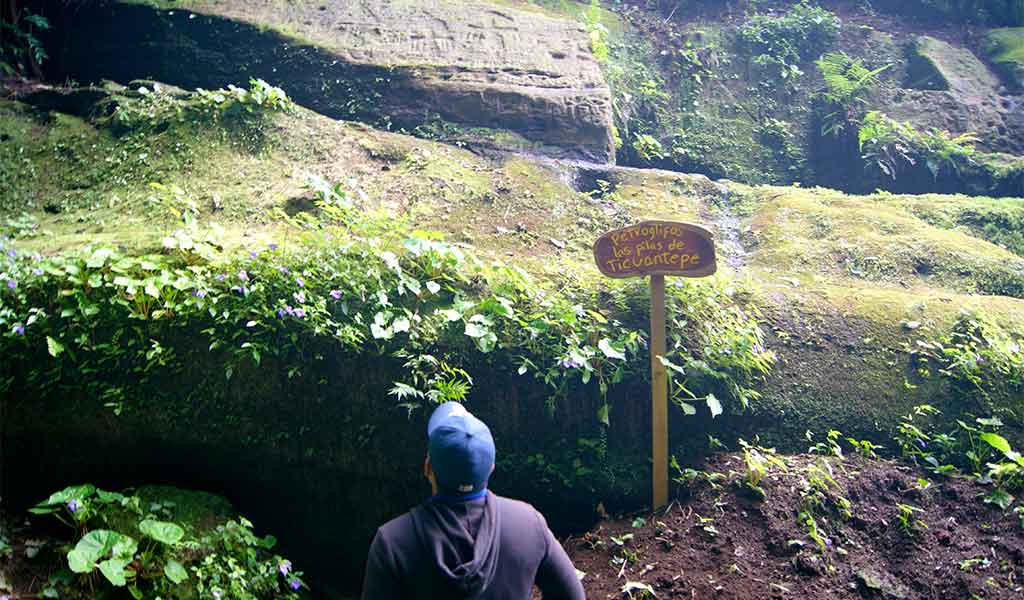 The site is located at km 18.6 road Ticuantepe – La Concepcion (La Concha), then 2km west in the foothills of the mountain range of Managua. At the entrance of the estate are two funeral urns Sacasa Striated type belonging to Ometepe period covered by the 1350-1550 A.D. these were found 300m from the farm south and to 1300m of the petroglyphs.

The site is located in a wooded area of fresh tropical climate, in times of winter this area becomes a jungle climate pluvia as it provides the conditions for this change is to; this peculiarity was conducive to the prehispanic communities develop and subsisted because the flora and fauna provided living conditions.

The petroglyphs appear as a witness before writing that transcends time and can help understand the intellectual development and knowledge acquired by cultures over time. His worldview is emphasized in the communication between man and the world, rather than between man and man, an analogical thinking is causative had before. In this sense it is logical to think that objects loaded with representational art may have been valued in a difficult way to know for us. Throughout the Nicaraguan territory can be found examples of petroglyphs demonstrations like those found below.

Presents an archaeological site with rock art where the ancestors collected water sample of this are the two batteries with which account, product drip system and filtration, these were filled for storage of liquid for later removal and transfer to other areas.

Two sets of panels forming a complex of unique designs in stones in the area. They have identified different representations subdivided into three sections: the left side in the bottom you can see a set of designs with anthropomorphic features two faces and a mask. These figures and the panel can be seen above a line that divides the earth from heaven.

In the top two forms of “f” symbolizing birds in flight and a triangle that is the representation of an erupting volcano, which could be seen the Momotombo volcano distance seen from the mountains of Managua and the position petroglyph in the set is the north side.

by AdminVisitNicaragua 16 Oct, 2018 in Archaeology